Many of you have at one time or another played the video game Madden NFL™. Named after Pro Football Hall of Fame coach and commentator John Madden, it has sold more than 100 million copies and has generated over $4 billion in sales (Gaudiosi, 2013). The video game designed by EA (Electronic Arts) Sports™ uses the name and image of real NFL players. For each player, there is a corresponding Madden Rating that is used to dictate their level of performance within the game. Many NFL players are fans of the game and when a new version of the game comes out they immediately check out their game rating (McClusky, 2003). Players often complain to EA Sports™ about the inaccuracy of their rating or appearance (Hruby, 2010).

The Madden Rating for each player is a composite of scores in 43 categories that each player is graded on and players are categorized as either rookies or veterans. For rookies, data from pro days and the NFL combine are used to determine the ratings for speed, strength, and other performance categories. For veterans, these attribute scores are assigned based on NFL game film and scouting reports. The ratings for each of the 43 categories are then weighted based on the player position. As an example, successful offensive lineman play is dependent on the player’s ability to pass block. The Madden Rating is significantly impacted by that attribute (all offensive line positions have at least 20% of the Madden Rating determined by the “Pass block” attribute, with the “blindside” offensive line position at 39% of their score). However, some attributes, such as jumping and route running are not important for the offensive linemen position and are non-factors in the Madden Rating for offensive linemen. Since there are a few attributes for athletes at all positions that could be directly related to body composition, I decided it would be fun to examine the Madden Rating against measures of body composition. Working with Dr. Joe Ostrem from Concordia University, we decided to explore the relationship between an athlete’s body composition and their Madden Rating and individual attribute scores on the EA Sports Madden NFL™ video game. In this blog post, we will focus on the Madden Rating.  In an upcoming blog post, we will focus on a few of the individual attribute scores such as speed, strength, etc.

Data collection for body composition and Madden NFL ratings
In a previous study in NFL players (Dengel et al., 2014) we had determined the body composition in 411 NFL players using dual X-ray absorptiometry (DXA). For the determination of body composition, DXA is the gold standard. Of these 411 NFL players, we were able to determine the Madden Overall Score in 214 players. The performance values for each player were retrieved from Madden NFL™ (Electronic Arts Inc., Redwood City, CA, USA) using the Microsoft™ platform (Xbox™ and Xbox 360™) (Microsoft Corporation, Redmond, WA, USA). To be as accurate as possible we retrieved the closest performance values for each player from the Madden NFL™ video game that corresponded to the date of that player’s body composition test.

Body Composition
Table 1 compares the physical characteristics (i.e., age, height, weight, and body mass index) of the participants by position. If positions share a letter within each row, there is no significant difference (p<0.05) between them. As we have previously reported (Dengel et al., 2014) in this group of professional football players we observed that body composition of defensive backs and wide receivers was never significantly different from each other. The offensive linemen had significantly more fat mass than defensive linemen, but the 2 positions were similar for all measures of lean mass. Interestingly, we observed that linebackers and running backs were not significantly different from each other for all measures of body composition. Tight ends were significantly different from offensive linemen on all measures except upper-body lean mass and the ratio of upper-body to lower-body lean mass. 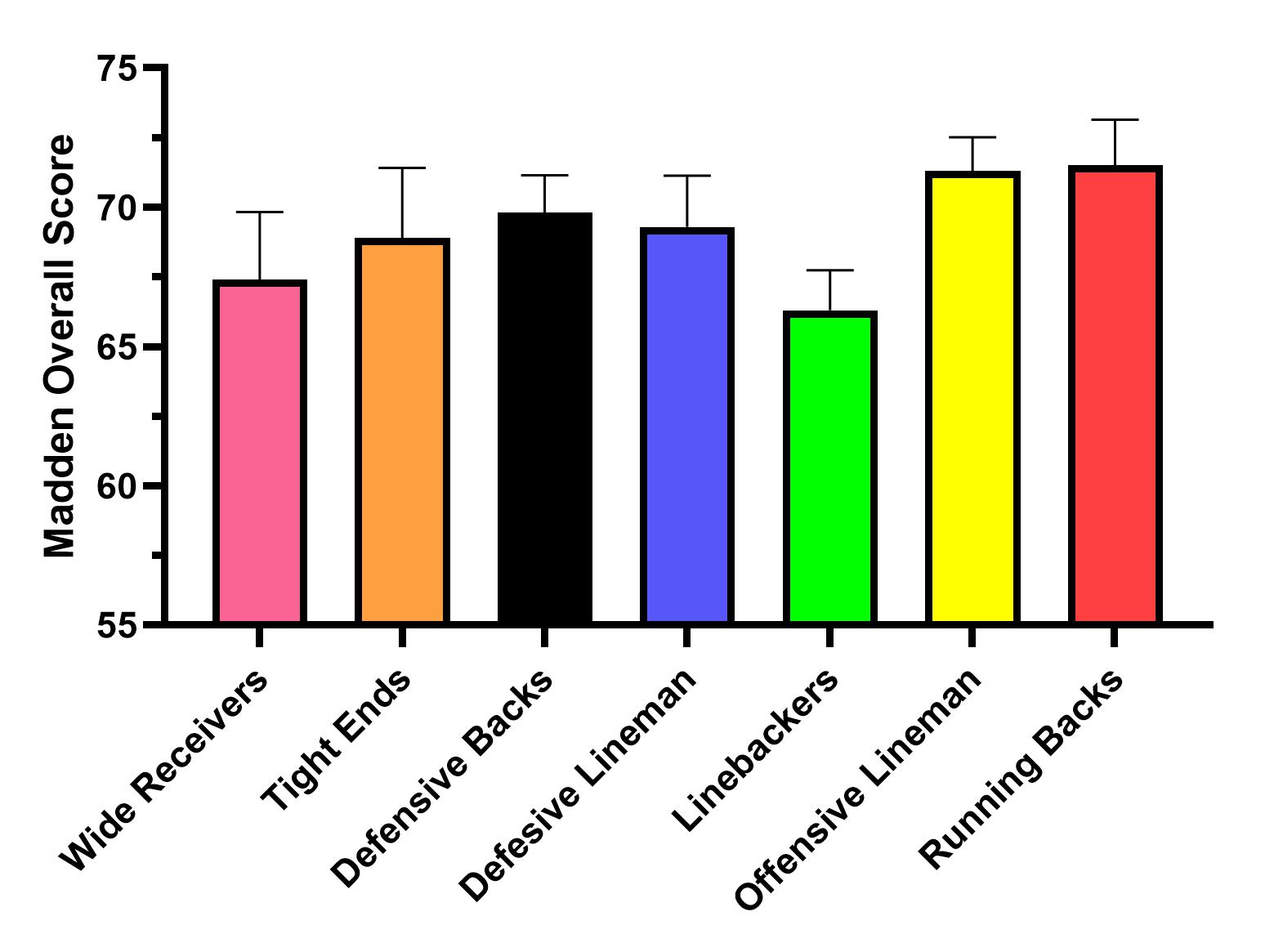