I often wonder what changes in body composition occur over the course of a career for collegiate football players. Although the question is simple, getting data to answer the question is a little harder.  In an attempt to examine this question, I was able to acquire body composition data from over 700 collegiate male football athletes from five different NCAA Division I Universities, whose programs had utilized dual X-ray absorptiometry (DXA), which is considered to be the “gold standard” for measuring body composition. These athletes were scanned multiple times during their collegiate careers. In total, over 2,500 scans were analyzed in this group of collegiate football players. Even though college athletes can range in age from 17 to 24 years of age, I restricted the analysis to only include scans from athletes’ ages 18 to 22 years old, due to the low number of scans in 17, 23 and 24-year-olds. It is important to point out that not every athlete had a scan at the same point in time, but we will account for this in the analysis. To help you look at the data in the figures below, I have used a letter system to indicate differences. If data points share the same letter (i.e., a, b, c, d) they are not significantly different. However, if data points do not share the same letter then those data points are significantly different from each other.

Changes in total body mass during a 4-year period
So, let us first look at changes in total body weight that would occur over a 4-year playing career. In the figure below, you will notice that, as expected, there is a steady increase in body weight from 18 to 22 years. An increase in body weight is not too surprising given that most individuals continue to grow during these years. The average increase is approximately 4 kilograms or 9 pounds. This is probably less weight than most coaches and athletes think an individual will gain over a 4-year career. I often hear coaches say that they will take a high school recruit who is a little undersized and develop him into a larger athlete. The data presented here would suggest that this is true; however, I wonder if coaches and athletes realize that they can expect an average increase of only 9-pounds. 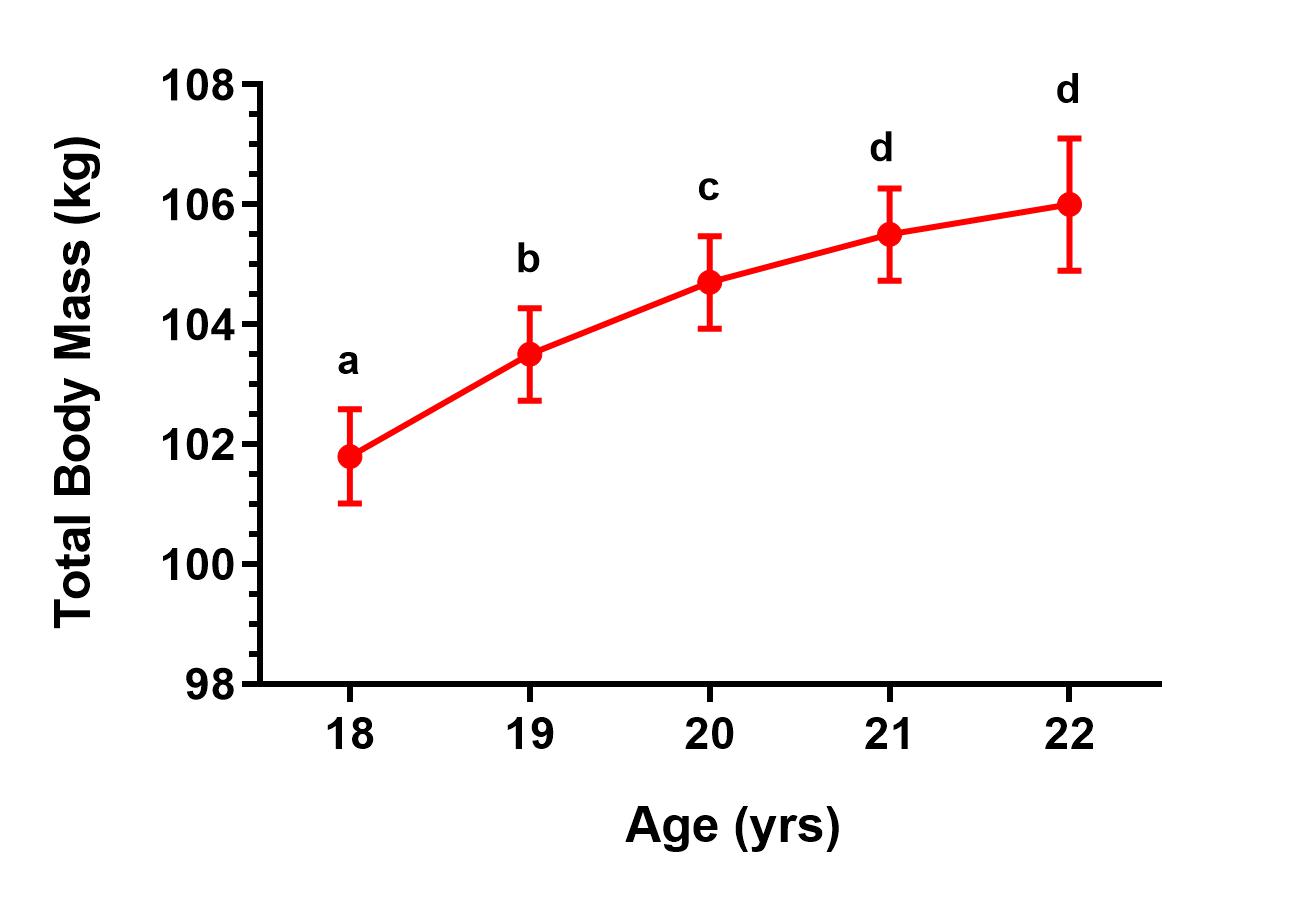 Changes in percent total body fat during a 4-year period
With the increase in total body weight, one can expect a slight increase in percent total body fat from 18 years to 22 years old.  Although the graph below looks like there is an increase, each year it is only significant in between 18 and 19 years of age. The difference between the other years is not significantly different. This is actually good news for coaches and athletes since few players want to see their body fat increase over their careers. 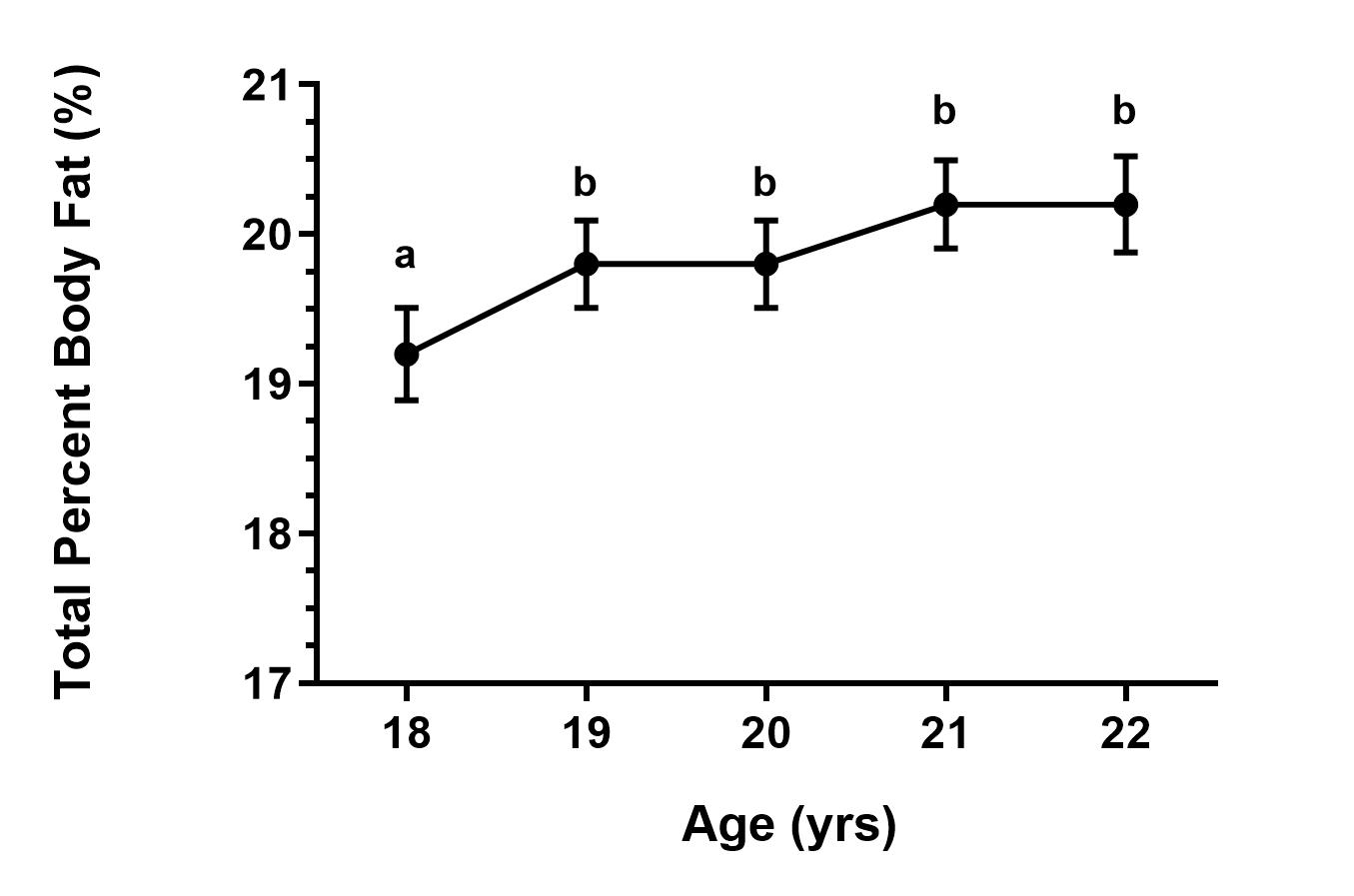 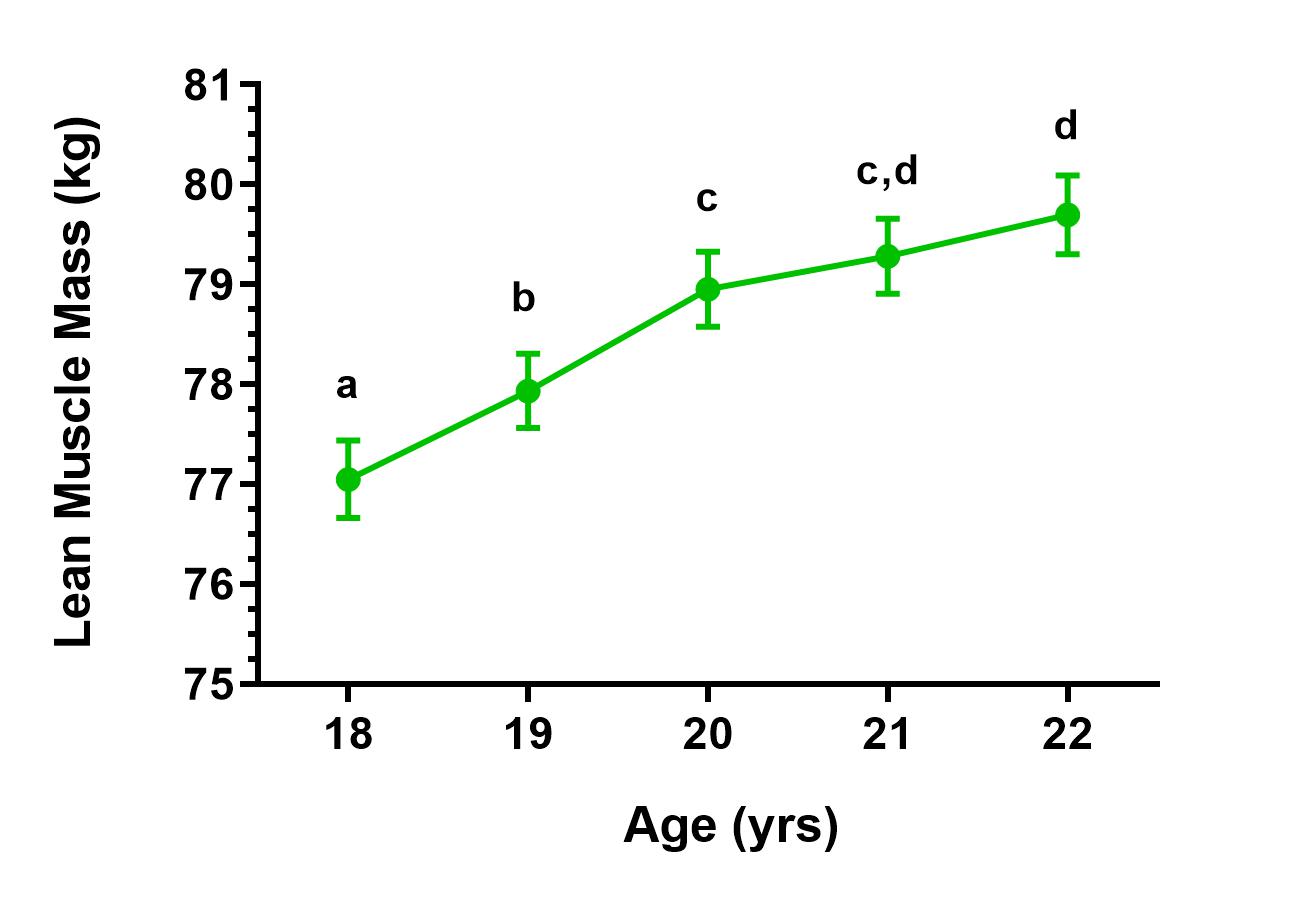 Changes in fat mass during a 4-year period
The data examined in this study suggest that fat mass will increase from 18 to 19 years of age, however, after that it will remain relatively constant. This is good news for coaches and athletes who are looking to increase total body weight through increases in lean muscle mass.  It is important to point out that there is still an increase in fat mass, just not as much as the increase in lean muscle mass. In other words, it is not possible to add weight without adding some fat mass. Again, for the defensive and offensive line positions in particular, adding mass to athletes will always be a combination of lean and fat mass. It is important for football programs to not only measure changes in total mass, but also changes in lean as well as fat mass. 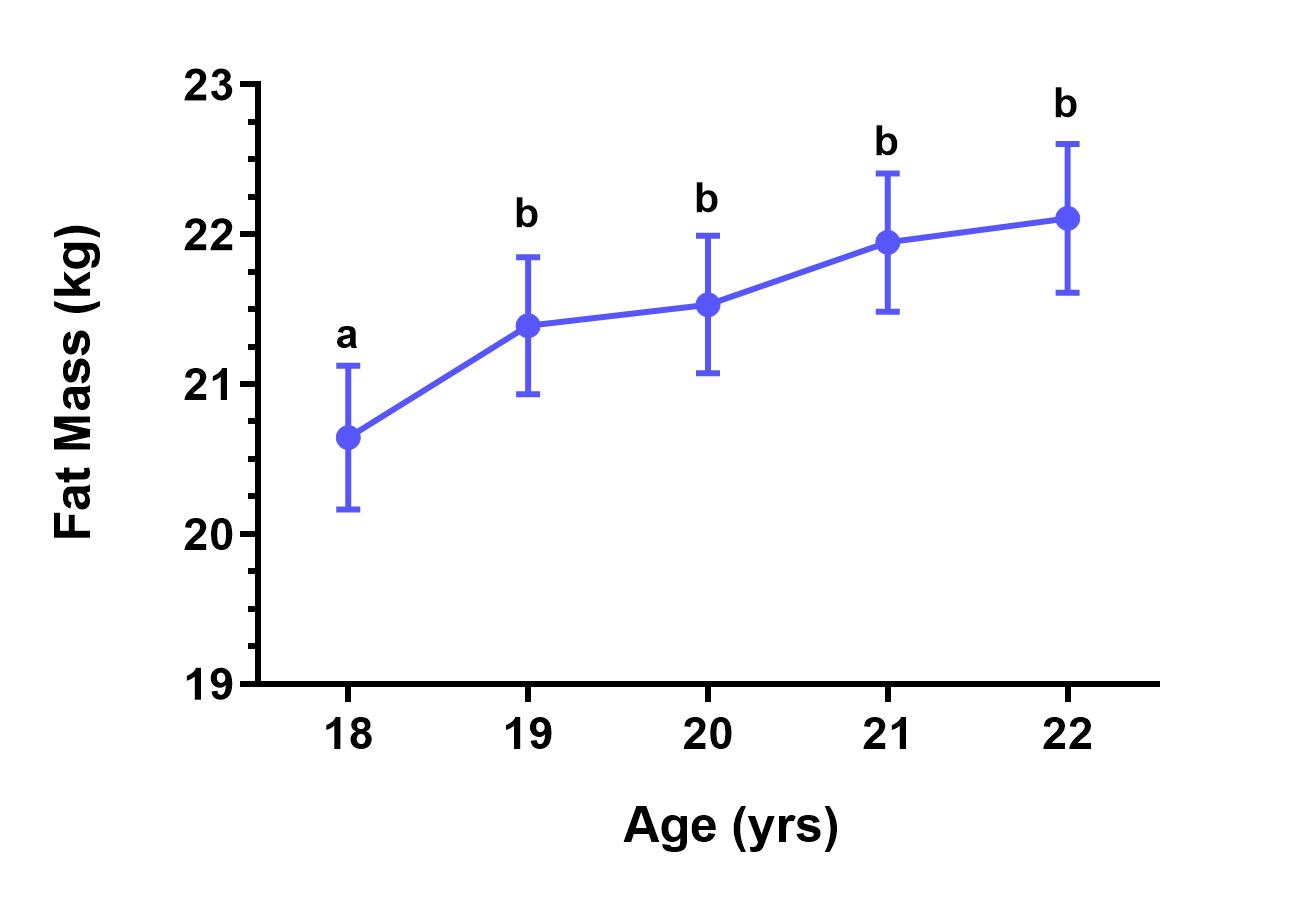 What does it all mean?
Before I try and summarize the data presented in this blog I think it is important to point out what I mentioned at the beginning.  In examining changes in body composition over the course of a 4-year collegiate career we used a pool of 2,500 DXA scans from 700 Division I college football athletes. Obviously, it would be best if every athlete had a scan at every time point. Unfortunately, that is not the case with this dataset and it might impact the results to some degree. In addition, I think it is important to remember that changes in body composition during a 4-year collegiate career will be different even among teammates undergoing the same conditioning and weight lifting programs. Athletes respond differently to conditioning and weight lifting due to a variety of factors, one of those being genetics, which is beyond an individual’s control. In addition, individuals grow at different rates. One individual may enter college at the end of his growth years while another athlete may still be growing.  This will affect the individual outcome of an athlete.

So what are the takeaway messages?  The positive message from this data is that we can expect to see an increase in bodyweight over this 4-year period.  It appears that this increase is driven to a large part by an increase in lean muscle mass. On the negative side, taken collectively, we cannot expect athletes to gain a lot of body weight or lean muscle mass during this period.  Coaches may find this hard to believe, but the data from this study suggest that over a 4-year career an athlete will gain on average of approximately 9 pounds of body weight. Of these 9 pounds, approximately 6.6 pounds of it will be lean muscle mass.  I am sure many coaches and athletes think that over their collegiate careers they are going to add about 20-30 pounds of additional body weight and that the increase will all be lean muscle mass.  The data utilized here would suggest more modest changes in body weight and total lean muscle mass should be expected. Also, this change is steady and does not happen in the first year or two. I believe this data also points to the need for regular analysis of body composition to evaluate training strategies and maximize the increases in body weight and lean muscle mass over a player’s career.