We recently published a paper in the International Journal of Sports Medicine (Roelofs et al., 2020) on body composition determined by dual X-ray absorptiometry (DXA) in over 175 NCAA Division I collegiate female soccer athletes. One of the unique aspects of this study is that due to the large number of athletes tested, we were able to separate soccer athletes by position into defenders (n=57), forwards (n=47), midfielders (n=51), and goalkeepers (n=20). The article reports on total and regional body composition by position as well as changes in body composition throughout a competitive season at six time points (i.e., summer off-season, pre-season, in-season, post-season, winter off-season, and spring season). Given the amount of information contained in that paper it would not be possible to discuss the findings in a single blog so I decided to write about the findings of this scientific paper in two separate blog postings. The first blog post will discuss the differences in total as well as regional body composition by position, while the second blog post will discuss the changes in body composition during a competitive season. 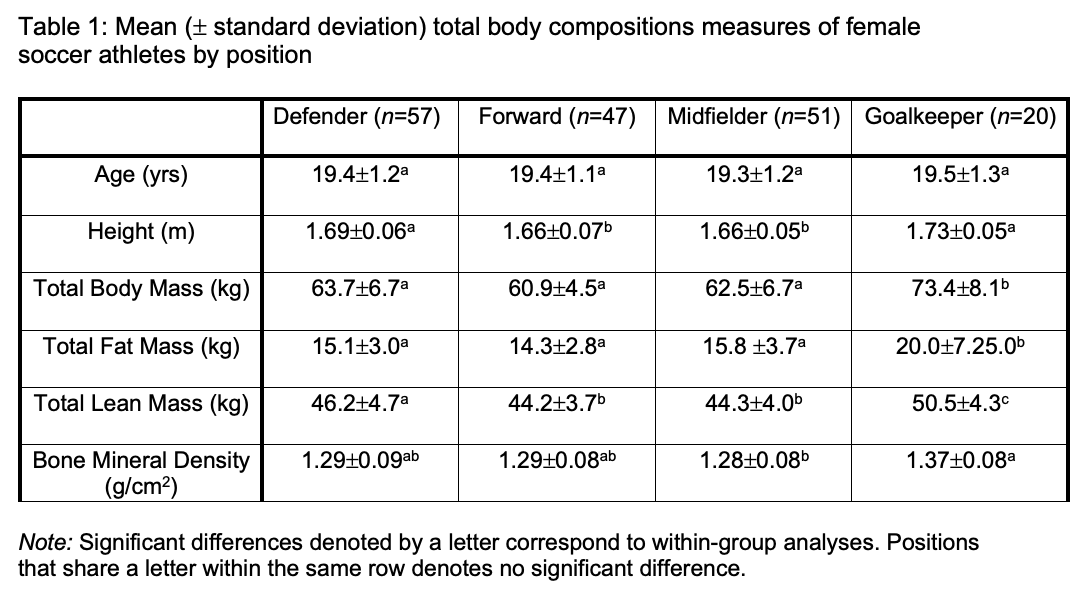 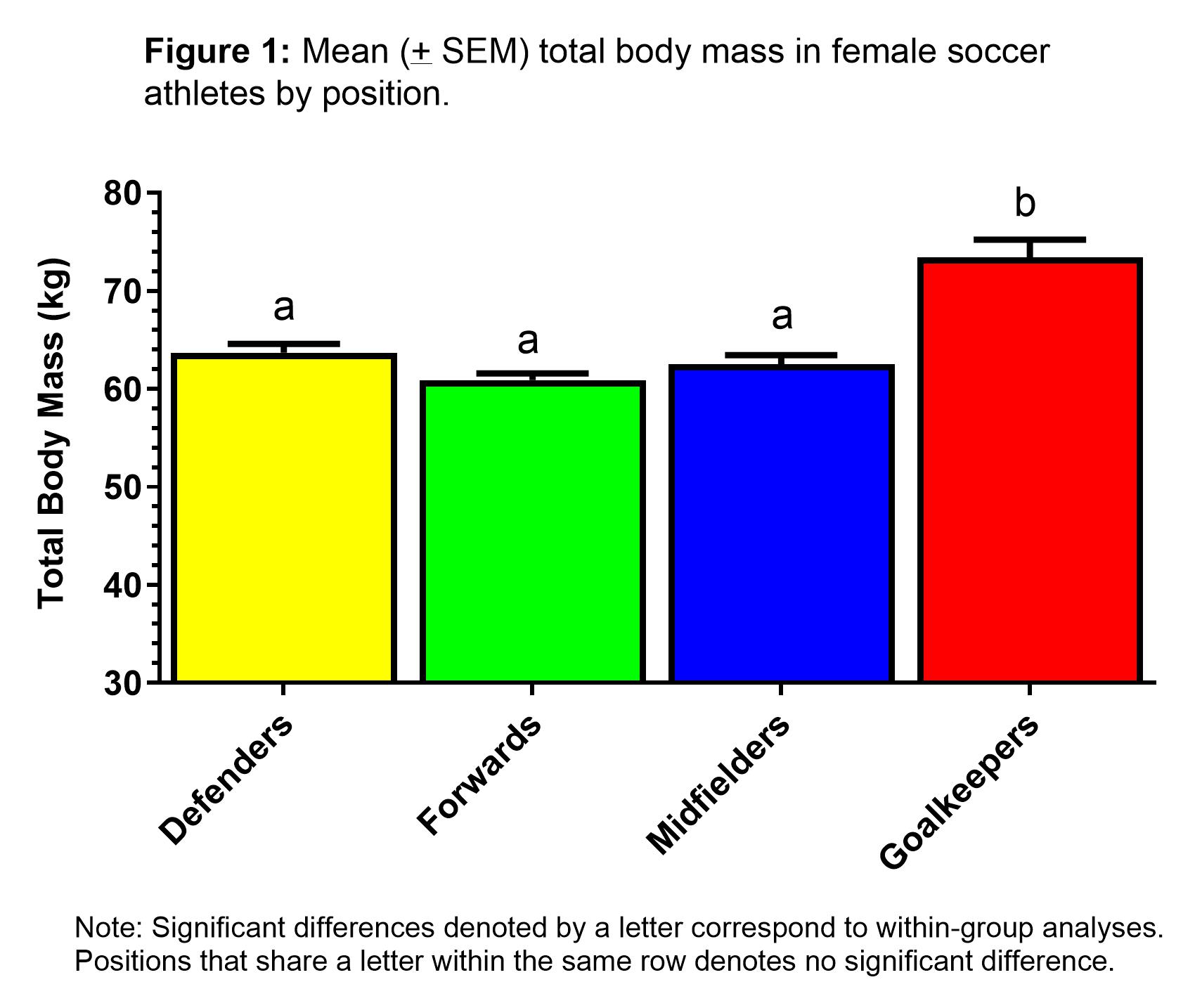 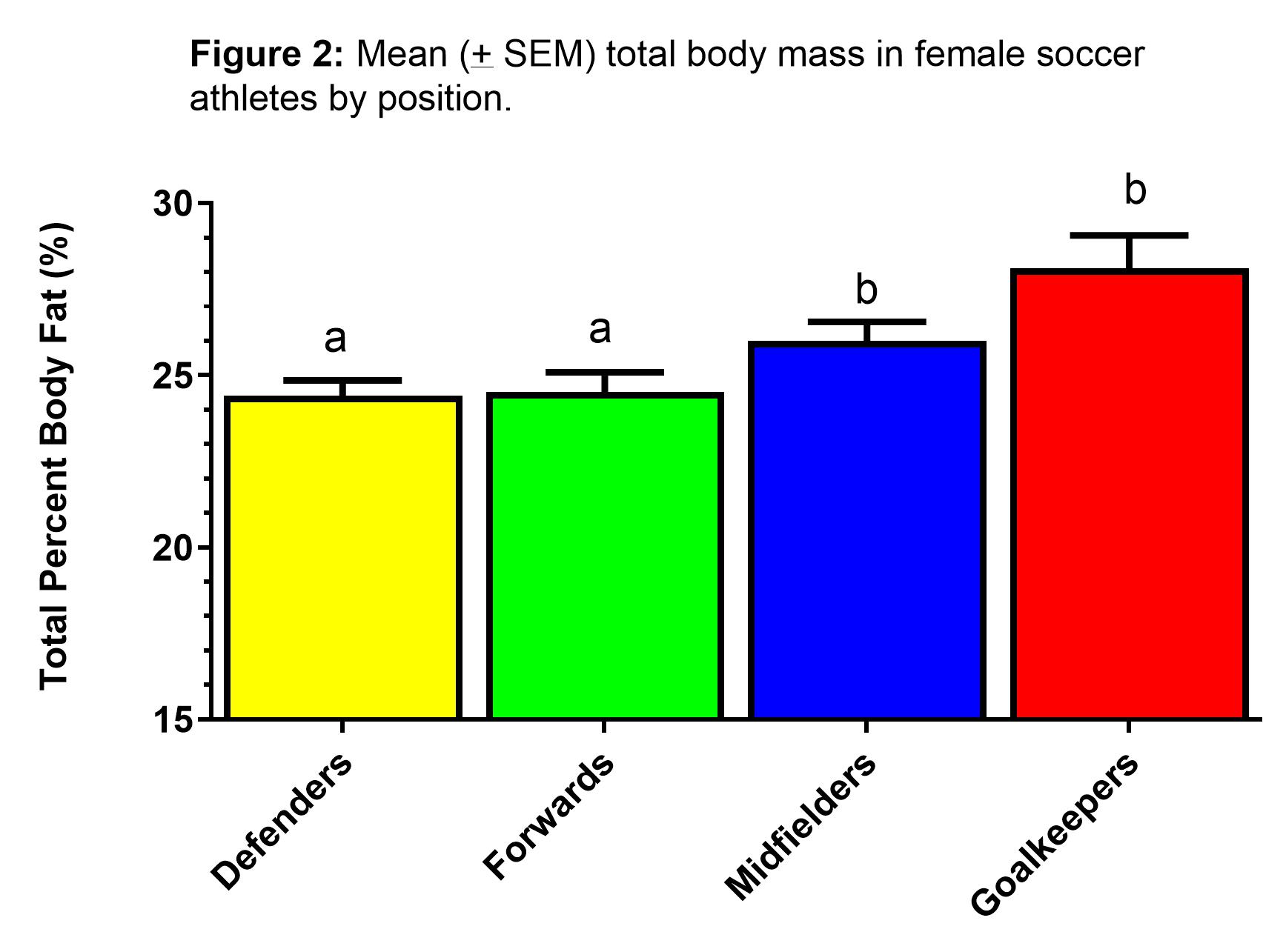 Regional body composition measures of female collegiate soccer athletes (Table 2).
The DXA allows us to not only accurately determine total body composition, but it also allows us to look at regional (i.e., arms, legs, trunk, etc.) body composition. Similar to our findings concerning total body composition, in the present study goalkeepers had significantly more arm, leg, and trunk fat mass than the other positions.  A similar scenario is seen when we look at lean mass with goalkeepers having more arm and leg lean mass than the other position players. Although there appear to be significant differences in visceral adipose tissue between positions the large degree of variability in this measure limits there being any statistically significant difference in this value. Therefore, it is more important to look at this value on a case by case value rather than positional differences. 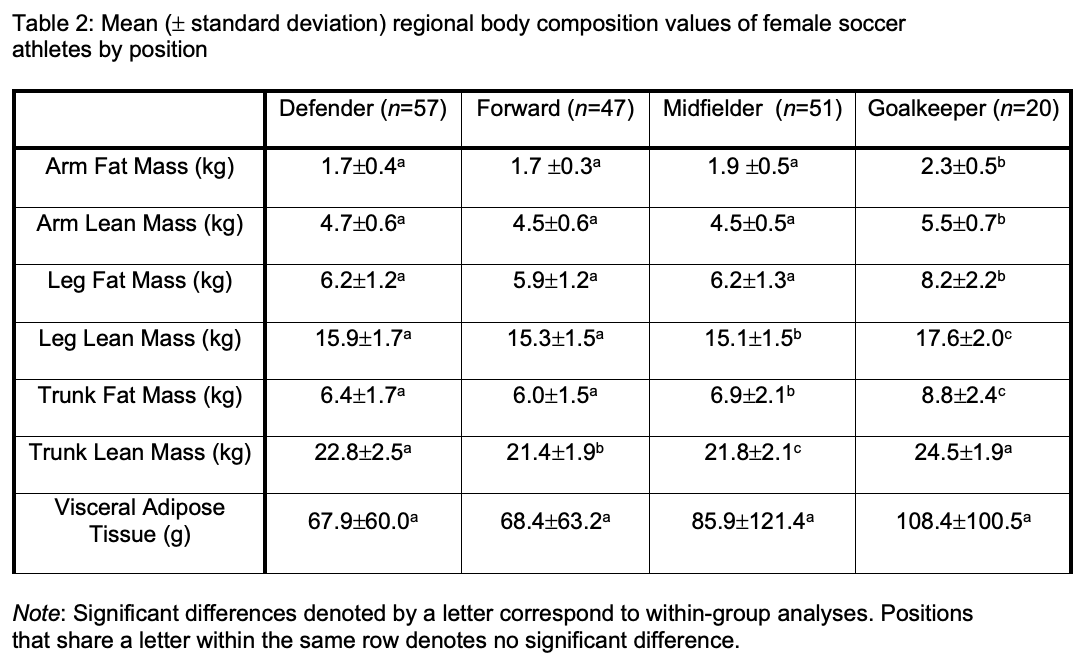 What does it all mean?
So what does it all mean? First of all the data presented in this paper (Roelofs et al., 2020) provides normative data not only for total body composition but also for regional body composition measures as well as visceral adipose tissue in female collegiate soccer athletes. In the present paper, the position of the female soccer athlete had an effect on the athletes’ total as well as regional body composition measures. Although, the increased overall size (i.e., height, total body mass, etc.) of goalkeepers may not be too surprising. It is important that the increased size in these athletes is not accompanied by an increase in fat mass. Quick movements are often a requirement of goalkeepers and carrying additional fat mass does not help in overall quickness. In the next blog in this series, we will examine changes by position in female collegiate soccer athletes. For those that want more detailed information found in this paper, please contact the corresponding author Dr. Don Dengel (e-mail: denge001@umn.edu).

Read Part 2 of this series