Regional measures of percent fat (Percent fat)
Let’s take a look at a couple of DXA scans from two National Football League (NFL) players. Both players were starters for their respective teams and were Pro Bowl selections at their position.

Athlete A was an NFL defensive lineman (edge rusher). It should be noted that this athlete played in a 4–3 defensive alignment where the defensive ends tend to be smaller than the defensive ends in a 3-4 defensive alignment. Athlete A was 76 inches (6 feet, 4 inches) tall and weighed 250 pounds and had a total percent body fat of 14.2% fat. This is amazing for an NFL defensive end, even for one who plays in a 4-3 defense. If you look at the DXA scan image for Athlete A below you will notice that he is not 14.2% fat throughout his body. Different areas of the body have higher percent fat levels while there are other areas in the body that are lower than the total percent fat value. For example, his right arm is 10.8% fat while his left arm is 11.2% fat, and both arms are lower than the 14.2% fat total body level. His right trunk area is 13.3% fat and his left trunk area is 12.1% fat. The android region (i.e., the area between the ribs and the pelvis) is 11.2% fat while the gynoid region (i.e., the region including the hips and upper thighs) is 13.6% fat. Athlete A’s legs have the greatest percent fat values with his right leg being 16.3% fat and his left leg being 16.1% fat. 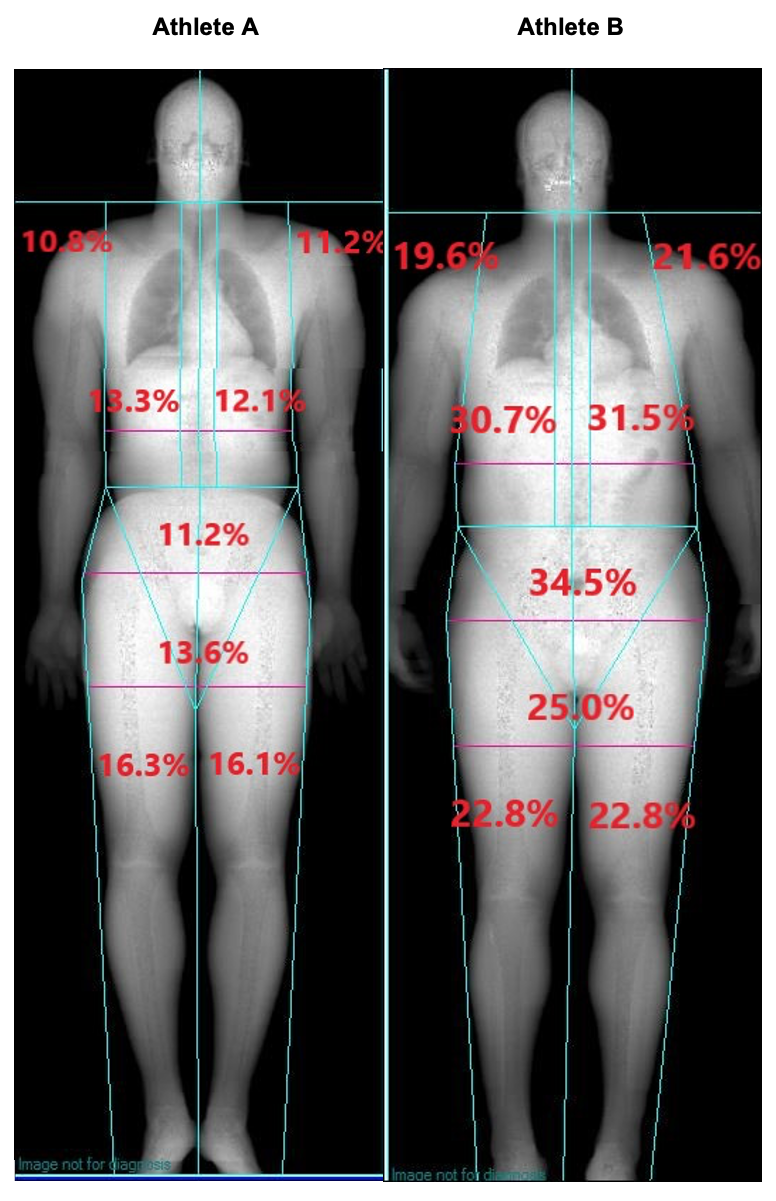 Ways to use regional measures of body composition
You may be saying to yourself this is interesting, but how do I use this data to help myself or my athlete. So let’s take the data from our two athletes and discuss how we would use it. In looking at Athlete A you see a player who has very low body fat and the fat is distributed pretty evenly on this frame. Depending on how this player is being used in the team’s defense a coach might want him to add more weight. The team’s strength coach and the dietitian may work together to develop a plan to have him increase his calorie intake and continue this strength and conditioning program, which is obviously working in terms of keeping his percent fat low and balanced throughout this body. The coach and the dietitian may want additional DXA scans to monitor the increase in body weight to make sure that the majority of this weight gain is muscle and not fat. Remember Athlete A is playing at a Pro Bowl level so the coaching staff may decide that the player is right where they want him and just want to continue everything (strength and condition program, diet program) as it is. He is primarily an edge rusher and additional weight may slow him down. Future DXA scans can be used to monitor the player to make sure that he continues his current program.

Athlete B presents the coaching staff with a different sort of issue. Clearly, Athlete B is carrying an excess of body fat as evidenced by the higher proportion of fat in the abdominal region. Showing Athlete B his regional DXA scan report might help demonstrate this point to the athlete. The dietitian could work with the athlete to limit his caloric intake to assist in a program of weight loss. The strength coach may work on a strength and conditioning program that targets core muscles in the abdominal region. Future DXA scans can be used to track the progress of the new diet and strength program. Using these new regional DXA scans, the dietitian may alter the new program if the weight loss is not occurring or the weight loss is occurring too fast and Athlete B is losing too much muscle mass. Now Athlete B may argue that he is playing at a Pro Bowl level so why change? The coaching staff may point out that the reduction in weight and fat mass may make him more mobile and able to elude pass rushers. In addition, the loss of access weight, especially fat weight, may take the unneeded weight off of his leg joints and may prolong his career.

Set up a demo